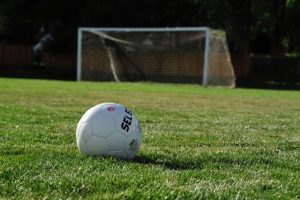 The MS girls’ soccer team closed out the season with an exciting 1-0 victory over Ellicott on Wednesday.  The parent/player scrimmage this week was a fun way to close out the year, along with some awards.
Head Coach Amos White had this to say about the season:  “The middle school girls improved dramatically over the course of the season, which was highlighted by a good win over Ellicott in our final match of the spring. We had a lot of young players who had never played soccer, and the program definitely grew in numbers. Our young players meshed well with our large 7th and 8th grade classes. Strong leadership was provided by our two captains, Gemma G. ’23 and Montana J. ’23.”
The season was capped by an awards ceremony in which the following girls were recognized:
Most Improved Player Award: Kayla H. (7th)
Co-Coach’s Award: Morgan J. (8th)
Co-Coach’s Award: Naomi E. (7th)
Co-MVP Award: Lexi E. (8th)
Co-MVP Award: Mia L. (7th)
Kodiaks Official Sponsor