Kodiak Athletics is excited to announce that alums DeLovell Earls ’10 and Nataya Stepleton ’15 have returned to coach high school soccer for CSS.  Earls will lead the Kodiaks as the head coach for the boys’ squad with Stepleton by his side as assistant coach.  Both were multi-sport athletes for CSS earning accolades in both soccer and basketball throughout their careers. Earls and Stepleton have similar soccer resumes with each earning All-State honors in soccer as center midfielders while making the Tri-Peaks League All-Conference Team starting as sophomores.

Basketball also adorns their resumes with Earls earning the 2A “Mr. Basketball” title in 2009 after the Kodiaks won their first state title in school history.  He went on to play Div. I basketball at the U.S. Air Force Academy where he also had opportunities to coach at the Prep School. Along with several other CSS alums, Earls is working hard to launch a new business within the exercise industry.  He is “most excited about returning to the CSS community and facing a challenge of being a head coach — a first for me,” stated Earls.

Stepleton, who left her mark as a Kodiak basketball player too, recently graduated from the The College of Idaho and has returned to Colorado Springs to work in the non-profit industry.  “I’m looking forward to sharing my passion for soccer with the CSS teams and appreciate this opportunity to give back to the school,” added Stepleton.

Please join us this Friday, August 9, from 6:30 to 8:00 p.m. on Boddington Field for a Meet & Greet Kick-Around.  All athletes and parents are invited to lace up your shoes and come on out to the field for some soccer fun and to meet our coaches. 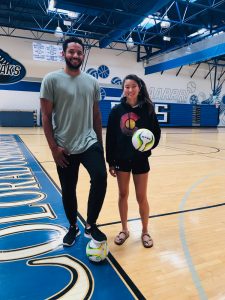