For the second game in a row, the girls’ basketball team trailed 12-18 at the half, only to outplay their opponents in the second half for the exciting wins. The 39-32 come-from-behind win on Saturday against league-rival Peyton electrified the crowd at Tutt Field House and launched the Kodiaks into the Top 10 CHSAA 2A Poll for the first time in school history.

On Tuesday, the Kodiaks traveled for a non-league matchup with a 3A Ellicott from the Tri-Peaks League. Game previews predicted a win for the girls from CSS who are on a 6-0 win streak, but numerous missed scoring opportunities, untimely fouls, and sloppy play overall put the Kodiaks back in the locker room down 12-18 at the half.  Another cold-shooting quarter with a mere 3 points placed the girls in a 15-28 scenario to start the fourth and final period. Two minutes into the period, the Kodiaks turned on a switch and began executing the game plan of attacking the basket from all areas of the floor, thus, leading to a stopped clock and free throws — 24 in the period to be exact, 11 on which we connected.

Before you could say the words GO KODIAKS, the girls had gained momentum and the lead, never looking back. Senior captain Sarina M. was on a mission to get to the free-throw line, shooting 7 for 14 at the charity stripe and finishing with 14 points–11 in the final period.  But her timely 3-pointer from the corner after a time-out provided the dagger as the girls pushed the lead to 6 points. Sarina also pulled down 9 rebounds and collected 4 steals for the girls in black.

Junior Bailey R. played the game of her career finishing with 16 rebounds while intimidating Ellicott with her vast wingspan in the lane. Her 5 for 6 shooting at the free throw line was critical to the victory, all perfect shots with the game on the line.  Guards Mia C. ’22 and Kate G. ’20 added the spark for the turnaround with scrappy defense, put backs off steals, and critical free throws down the stretch.  Senior leader Kate G. found the basket for 3 points, and Mia C. attacked for 3 buckets along with 4 for 6 pressure free throws for a total of 10 points. To round out the scoring for the Kodiaks, junior Whitney R. rallied for 9 points and 6 rebounds.

“The finish to this game was absolutely amazing and so exciting for our program,” commented Coach Vicki Vaughan. “It’s one for the record books in regards to comebacks, grit, and never giving up. Scoring just 15 points in the first three quarters, and then finding a way to put 26 points on the board in the final 8 minutes for the win just does not happen very often. We are definitely gaining momentum with each of these come-from-behind victories, and confidence as well. Still, our message is one game at a time and finding the formula for playing with such intensity and poise from the tip-off rather than waiting until it’s almost too late.  I’m super proud of this team and where we are headed.”

The JV girls fought hard in a 23-35 loss to Ellicott on Tuesday night. Freshman Cailan R. finished the night with 10 points off of 5 buckets, a career high for her this season.

The boys and girls are back in action on Friday night at Tutt Field House against the Dolores Huerta Scorpions.  Girls’ JV starts at 4:00, followed by boys’ JV at 5:30, then varsity action after that.  Please join us for Family Night and support your Kodiaks! 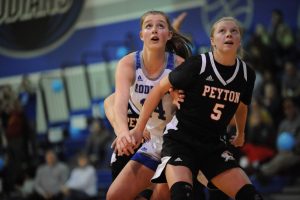 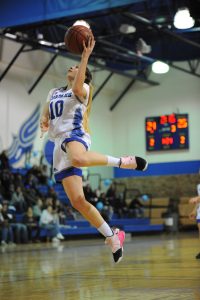