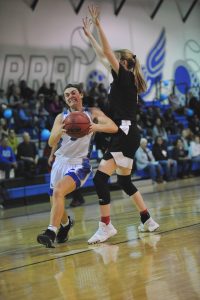 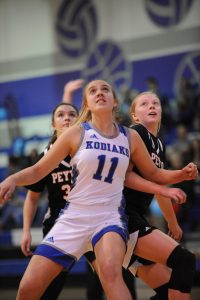 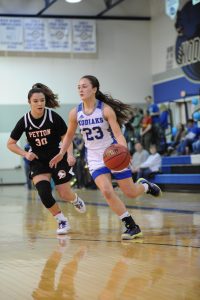 Trailing at the half in three of the last five games, the girls’ basketball team found a way to get the job done in the second half to earn three important victories.  Back-to-back games against Peyton and Ellicott both showed the Kodiaks trailing 12-16 at the half.  With a mixture of defensive intensity, fight, determination, and poise, the girls turned it on to win 39-32 and 41-34 in both games.

Last night the girls trailed at Calhan 15-24 heading into the locker room after a dismal shooting performance that tallied only 3 buckets in the half. After settling down in the second half, the girls in black scored 10 straight points to take back the lead at 25-24, never looking back. Senior captain Sarina M. led the charge with 3 timely three-pointers, and 4 for 5 tallies from the charity stripe, ending the night with an impressive 17 points. Work horse Whitney R. ’21 found her rhythm in the second half, attacking the basket for 16 points with 6 for 8 from the free throw line, along with 9 rebounds.

Guards Mia C. ’22, Kate G. ’20, and Cameron R. ’23 shut down the shooters for Calhan in the second half which turned the tide for the Kodiaks. Mia C. scored 4 points and dished out 5 assists, mostly in critical moments to shift the momentum. Junior Alair F., starting for Bailey R. who is recovering from a concussion, calmly sank two free throws to add to the 13-22 team total, a stat that favored CSS as Calhan was 7 for 19 on the night.

“Our challenge has been to get the motor running full throttle at the start of the game, not waiting until we have to get the job done in the second half,” commented Coach Vicki Vaughan. “This team is only now beginning to comprehend their abilities and believe in themselves. Once all cylinders fire at the same time, watch out!”