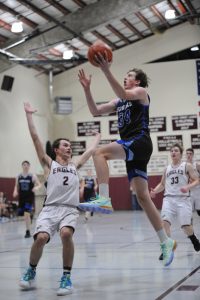 Junior guard Ben Mc. took the 5-7 Kodiaks on his back last night in a 68-57 league victory with Calhan on the road. His 27 points and 15 rebounds were career highs for the 6’2″ guard who is back in the lineup after nursing an ankle injury. Eight of his points came from the charity stripe where he was 8 for 11, mostly down the stretch, and he accrued a game high 6 assists.

Leading by 7 points at the half, the Kodiaks stayed with their 2-3 zone defense to avoid foul trouble, maintaining the lead the rest of the way.  Coach Tony Little commented, “I was impressed with how the boys kept the momentum and held off the Bulldogs each time they made a run.  It was a great win for us and a terrific team effort.”

With senior Kyle J. out with a pulled hamstring, others had to step up in a big way for the win.  Spencer B. ’20 held his own at the point position before fouling out, scoring 12 points along with 5 rebounds and 4 assists. After collecting 3 fouls in the first half, senior Luke T. found a way to play the entire second half foul free. His presence in the key was critical to the defense as he gathered 11 rebounds, 10 on the defensive end, and he found the hoop for 7 points.

Freshman guard Andrew H. sparked the offense with 3 timely three-pointers from the top of the key, concluding the game with a career high 15 points, 2 rebounds and 3 assists. Senior Leo Gu finished the night with 6 points off 3 critical baskets along with 3 rebounds. “Both Leo and Andrew stepped up as  starters and perfectly played within their roles with limited mistakes,” added Coach Little. “I’m equally impressed with our captains and how they led the team today, getting the job done without a lot of depth on the bench. Everyone contributed and as a result we are heading home with an important league win.”

The boys will play Cripple Creek today (Saturday) at 5:30 in Tutt Field House.  Back in December, CSS won the Kodiak Classic matchup with Cripple Creek 48-17.  The CSS girls’ JV team will play CC varsity girls at 4:00, and the girls’ Varsity team will take on Elbert at 7:00 p.m. Go Kodiaks!