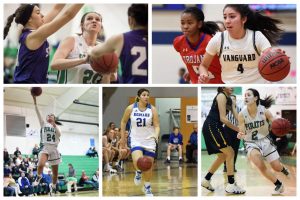 The Gazette Preps has been busy this past week recognizing area high school basketball players for their 2019-2020 seasons, many of which were cut short by the statewide pandemic restrictions. In a field of worthy talent, the CSS girls’ basketball team was rightfully recognized for their 19-4 record-breaking season. Leading the way was junior forward Whitney R. who earned First Team honors as the only 2A representative among the talented ensemble of five. Senior Sarina M. was named to the Second Team, while Honorable Mention honors went to Kate G. ’20, Mia C. ’22, and Bailey R. 21.

Whitney Richardi, jr., Colorado Springs School —Richardi led the Kodiaks to an unprecedented season in which they posted the best record in program history. With a near double-double average of 12.3 points and 7.3 rebounds Richardi helped CSS to a 17-2 regular-season record and a 16-game streak through the middle of the season. Richardi registered seven double-doubles and also averaged 3.4 steals and 1.3 blocks.

Josephine Howery, sr., St. Mary’s — After leading St. Mary’s to back-to-back state titles Howery returned for her senior year leading Class 3A in scoring, averaging 21.2 points – three points more than the next-ranking 3A scorer. The 5-foot-9 guard also averaged 6.8 steals, 4.6 assists and 6.8 rebounds as a senior. She finished her career with a 96-7 record in green and white and a career average of 16.2 points, missing just one game of her four-year varsity career.

Seneca Hackley, sr., St. Mary’s — Hackley embraced the best season of her career averaging 16.2 points per game as St. Mary’s dominated its way through the 3A postseason. Shooting 46 percent from beyond the arc and 65 percent from the field, Hackley’s accuracy, speed and ball handling was nearly unstoppable. As a four-year contributor the 5-foot-9 guard played in every game of the past four years with a career average of 11.4 points.

Catherine Cummings, sr., St. Mary’s — The 6-foot senior came into her own the final two years of her high school career, improving from a 4.2 points-per-game average as a sophomore to averaging 11.9 points and 7.1 rebounds in her final season as a Pirate. Cummings was one of three double-figure scorers for St. Mary’s and the closest to a double-double average as the team leader in rebounds.

Alexis Garcia, jr., Vanguard — The junior point guard helped lead Vanguard to a historic season, reaching the state quarterfinals for the first time in program history as the young Coursers rebounded from a 3-17 season just three years ago. Garcia led Vanguard averaging 13.7 points, marking her third consecutive season on top of the Coursers’ scoring. She ended her junior season with exactly 1,000 career points.