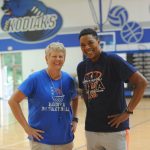 CSS Hall of Fame Basketball Coaches by Anslee Wolfe   CSS coaches Vicki Vaughan and Cathy “Bos” Boswell were recently inducted into separate Hall of Fames for basketball at their respective high schools.  Although they were playing in two different states (Indiana and Illinois), they both were Lady Tigers and both still hold several school records 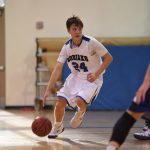 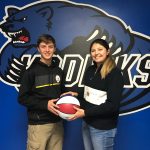 At the end of each athletic season, coaches around the state vote for the top players which then decides the All-State teams.  CSS was represented by senior Matt C. and sophomore Whitney R. who both earned All-State Honorable Mention honors this season.  Also, they both were recently named to The Gazette’s All-Area Honorable Mention Team for 1A-3A basketball, 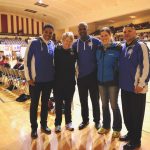 The 2018-19 basketball season has come to a close, a bit sooner than both teams would’ve liked as the Kodiaks began to peak at tournament time and had some good basketball yet to play.  Untimely injuries and the flu impacted the boys’ team as they lost 55-57 in a nail biter against Thomas MacLaren to end

Tonight when the #5 seed boys’ basketball team faced #4 seed Thomas MacLaren in the first round of the District 8 playoffs, there was a lot at stake.  A win would secure two more weeks of basketball with a final four appearance this weekend, and at least a regional game next week. A loss would 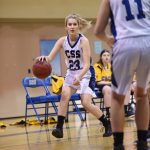 Both the girls’ (12-7) and boys’ (11-8) basketball teams finished above 500 percent; yet, both squads would admit they fell short of their full potential, losing several games that were within reach.  Now it’s tournament time — time to put everything together and leave it all on the court. The stage is set for District 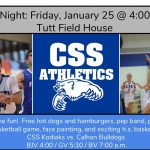 Don’t miss Family Fun Night in Tutt Field House!  Come out and cheer on the Kodiaks who host the Bulldogs from Calhan for an exciting Black Forest League matchup. Boys’ JV:  4:00 p.m. Girls’ Varsity:  5:30 p.m. Boys’ Varsity:  7:00 p.m. The CSS Booster Club will provide “free” hot dogs and hamburgers off the grill to the first 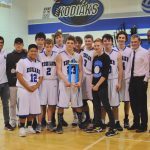 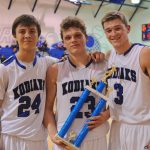 It was an exciting weekend for basketball at Tutt Field House for the 12th annual Kodiak Classic.  The girls and boys both beat FVS and then Cripple Creek in the championship games to capture the titles.  Fountain Valley School won both the girls and boys consolation games over Edison.  All-Tournament Teams were announced at the 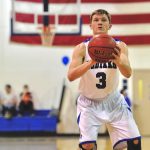 Both the girls’ and boys’ CSS basketball teams will play in the championship games of the Kodiak Classic on Saturday.  It’s a 2:00 tip-off for the girls and 3:30 for the boys, who will both compete against Cripple Creek.  The girls defeated FVS 45-28 after a slow start, and the boys pulled off a close